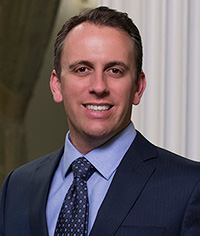 Marc Levine was first elected to the California State Assembly in 2012 to represent the North Bay area outside of San Francisco, which includes Marin and Sonoma counties. As an Assemblymember, Levine successfully authored over 80 laws leading state and national efforts to prevent gun violence, increase access to mental health services, and promote responsible and compassionate immigration policies.

During the Assembly’s 2021-2022 session, Levine authored legislation to promote health equity and mitigate the disparate impact of prostate cancer on certain populations. His bill proposed to enhance access to prostate cancer screening by prohibiting insurers from requiring cost sharing for PSA testing and digital rectal examinations for men who are 55 years of age or older or 40 years of age or older and high risk.

Levine began his career of public service in 2009 when he was elected to the San Rafael City Council where he focused on smart growth, environmental protection, expanding access to parks and economic development.

Levine earned a BA in Political Science at California State University, Northridge and a Master’s Degree in National Security Affairs from the Naval Postgraduate School. Levine lives in Marin County with his wife Wendy and their two children.

No comments to show.